As we prepare for our 35th Anniversary, Dr. Leader will share her memories of the early days of TEEN LINE in a series we like to call… 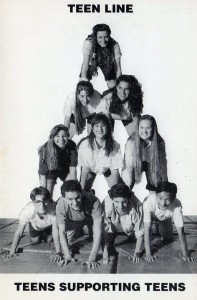 Being housed at Cedars-Sinai was really valuable for our ability to generate media interest and publicity for our venture.   I began by working closely with Cedars’ Public Relations Department. At that time my Cedars PR contact was the wonderful Peggy Frank who, as a mother herself, readily saw the value of TEEN LINE. She not only gave me good advice on dealing with the media but also any time there was something in the news about adolescents and she was contacted by media to have a Cedars “expert” give an opinion, she readily put forward my name and TEEN LINE.

Our first television blast was on KCET, our local PBS station, whose reporter extolled our virtues as a new program designed explicitly to help troubled teenagers.   This was soon followed by interviews with local newspapers like the Beverly Hills Courier and the Los Angeles Times.   But what really helped was our willingness to have our teens interviewed and for us to be open to sharing how important teens helping teens was during the adolescent phase of development.   What also helped was my having the word “Doctor” in front of my name since in 1981 I was awarded a Ph.D. in Clinical Social Work!

As the program evolved and teen issues were increasingly focused on by the media we became a valuable contributor to media. I also was asked to contribute book reviews when a new publication dealing with adolescence was being promoted. Then came some huge media concerns such as when the school shootings occurred in Littleton, Colorado. We took the opportunity not only to speak to media but we also expanded the hours we were open so that teens who were impacted could call the hotline from 10 am to 10 pm on the weekends.

As time progressed so did social media technology. We got a computer and our Outreach Coodinator also became our website developer.   With the advent of the internet and the increasingly important content on our website TEEN LINE became much more available to more youth than just Southern California.   Terry Lipton and I also put ourselves forward to speak to adolescent serving agencies and I became one of the founding members of the National Association of Peer Programs.   I would also send proposals to make presentations about our program to all of the organizations that I thought would be interested such as the American Association of Suicidology, The Society for Clinical Social Work, The Los Angeles Group Psychotherapy Society.

All of this was occurring along with an increase in our Outreach programs. We began to develop some special presentations in addition to a general one about TEEN LINE and were able to get funds to make a video about what we do, featuring our wonderful teen volunteers.   The special presentations ranged from ones on such topics as Teens and Tolerance, Eating Disorders, LGBT issues, and Teen Suicide Prevention. Crucial to these presentations were the presenting panels that always included youth that had personal experience of the issue being discussed.   I had soon realized that what every audience liked and remembered were personal stories and this became crucial as we began our involvement with training law enforcement.   In my next blog I will share with you how that started and how it has developed over the years.   This collaboration has been one of our great achievements!