In honor of our 35th Anniversary, Dr. Leader shares her memories of the early days of TEEN LINE in a series we like to call… 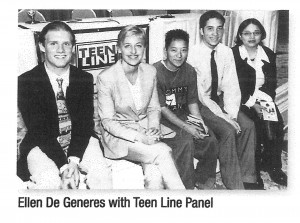 As we contemplated having a luncheon event as a fundraiser I was adamant that ours be special and different from so many fundraising luncheons I had attended myself where awards were given but the entertainment element was either a fashion show or a celebrity showing off!

We decided on including a feature that would involve having teen participation as a means of educating attendees as well as an invited guest speaker knowledgeable on the topic we planned to feature as part of our “food for thought” theme.   Here again the need for personal networking became important. Involving our board for their contacts was part of the process but I would also personally pursue every relevant connection I knew from my years as a clinical social worker in the community.

In the early nineties there was much in the news about gangs in Los Angeles and concerns about violence in general.  I had become acquainted with an agency called Community Youth Gang Services having invited speakers from this agency to help with training our teen volunteers on gang issues.  I decided to ask if they would be willing to speak at our Food for Thought Luncheon and urged them to speak of their own personal stories.   This event took place in Santa Monica’s Loews Hotel. We had a good turnout and two fabulous speakers, one of whom was a woman that had been a former gang member but was then working diligently to prevent youngsters from joining gangs.  She became a consultant for a movie about gangs in prison featuring Edward James Olmos. Sadly, that ended up costing her life. She was shot execution style by gang members resenting her role.  I mourned this loss.

We continued to have the theme for our Luncheon reflect on current issues confronting youth.   We developed a format that included a panel of teens that had experienced the particular issue and would be willing to speak of their personal experience.  Their participation would often move the guests to tears and the panelists would receive terrific applause.  We also would seek a well-known personality that was related to the theme that would be a suitable honoree for the event.

In the nineties Ellen DeGeneres’ TV show was cancelled when she publicly acclaimed being gay. I was fortunate that I knew someone that was close to Ellen’s mother, Betty.  I called Betty and told her we wanted to honor her and Ellen and that we would have a panel of LGBT youth speaking as well.  I invited Dan Pallotta, whom I knew from his AIDS walk efforts, to “host” and introduce Ellen and Betty.  My youth panel consisted of a Hamilton High gay student whose Mormon family had sent him to a program to try to make him heterosexual.  We had another gay student from a private school that encouraged LGBT acceptance, a Fairfax High lesbian student that was part of Cedars-Sinai youth program and a male transgender youth involved in a special high school program.

This luncheon event, held at the Beverly Hills Hotel, was outstanding.  Our youth panelists were amazing, so open about their personal experiences.  And of course Ellen and her mom were tremendously moving too.  One of our teen volunteers actually came out to his family following this event after receiving encouragement from Ellen to do so.  A photo of Ellen, and her then girl-friend, Ann Heche, with a group of our teen volunteers at the event is on display in our hotline room to this day. Two of the youth panelists at the luncheon asked me if they could do more speaking events.  They became the foundation of our “Growing up Gay” outreach that grew into an important component of TEEN LINE’s community service.   We eventually had a wonderful group of LGBT teens participate in this outreach.  I am proud to say that several of them have maintained contact with me over the years and have gone on to successful careers and gay marriages.

More about these fundraising efforts in my next chapter.  I am so very proud of our Food for Thought Luncheon, our honorees and youth participants.

Read the next chapter: Pt 9 – Food for Thought Luncheon Continued