In honor of our 35th Anniversary, Dr. Leader shares her memories of the early days of Teen Line in a series we like to call… 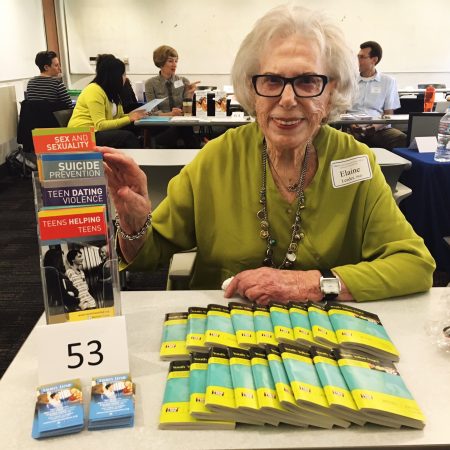 In my last blog I mentioned several agencies with whom we have established close relationships over the years.   Some of these are local non-profit agencies, others are national and topic-focused such as the American Association of Suicidology that also is a credentialling organization. Others are state, county or city departments.   One of the latter has been an extremely important department with which we have become very involved.  I am referring to the Los Angeles County Department of Mental Health’s Suicide Prevention Network.

TEEN LINE was invited to participate on the LACDMH Suicide Prevention Network when it was first established several years ago to bring together organizations and others who were involved in suicide prevention.   This included LAUSD and LA County Dept. of Education as the other major agencies dealing with youth.  However, the Network included agencies serving a compilation of organizations and individuals that are involved with the total age range from children through the elderly.

Over time the original co-chairmen eventually resigned and I am delighted to inform you that our own Cheryl Karp Eskin is now co-chair of the Network along with Carol Sagusti of the LACDMH.  TEEN LINE has always been one of the most active participants in the Network so this is well deserved recognition of our interest and commitment to suicide prevention.  The Network, in addition to regular quarterly meetings has a Planning Committee to organize an annual Summit that is offered to those in the community interested in the Network’s mission.  Each fall the Summit has focused on a different aspect of suicide prevention with a national keynote speaker and breakout workshops.

One of the benefits of being part of such a Network is not only getting the word out about TEEN LINE’s efforts but also to hear from other members of the Network how they impact the wider community.  In fact we have previewed two of our most important educational videos to Network members, valuing their feedback.  In addition we have learned and benefited from how others are contributing to suicide prevention outreach.   One member, a parent that had lost a child to suicide, offered to assist with our school outreaches and eventually joined the TEEN LINE Board of Directors!

Another aspect of such networking is bringing together people from different sources that may not have been aware that the Network existed and which could be mutually beneficial.  For example, I have been a volunteer clinician with The Soldier’s Project since its origination and have, like many others, been very concerned about the high rate of suicide amongst the military.  I, therefore, proposed inviting representatives from The Soldier’s Project to join the LACDMH Suicide Prevention Network.   And now one of their representatives is actively participating on the Summit Committee!

The above, along with our longstanding relationship with the LAPD community policing efforts is just another example of TEEN LINE’s outreach efforts.   More next blog!

‹ Previous Next ›
We use cookies to ensure that we give you the best experience on our website.
If you continue to use this site we will assume that you are happy with it.